Every year, global CIT revenues are as much as USD 240 billion lower due to profit shifting to tax havens.

The world’s wealthiest individuals transfer USD 7.6 trillion to offshore accounts to escape tax administrations. As indicated by the Polish Economic Institute in its report entitled ‘Global taxes in the post-COVID-19 era’, the introduction of global wealth tax, global climate tax and a global minimum CIT rate would result in annual revenues of USD 289 billion, USD 279 billion and USD 127 billion respectively. Such funds would suffice to vaccinate every adult around the globe against COVID-19 4 times per year.

‘The COVID-19 pandemic has severely strained not only health systems, but also public budgets. According to the IMF data, deficits in major advanced economies have grown by almost 10 pps in relation to 2019. At the same time, tax collection has been increasingly difficult. The world’s largest corporations have optimisation mechanisms in place, whereas the wealthiest tend to conceal their incomes and assets in tax havens. This challenge can be addressed through global taxes. Their implementation will help tighten tax systems, increase budget revenues and eliminate tax free-riders’, says Piotr Arak, the Director of the Polish Economic Institute.

It follows from the PEI report that the adoption of the three global levies – with relatively low rates – would bring an annual amount of USD 695 billion. Collected and distributed at the national level, such funds would boost the quality of public services. For example, the money would be sufficient to cover 55 million nurses’ annual salaries worldwide. 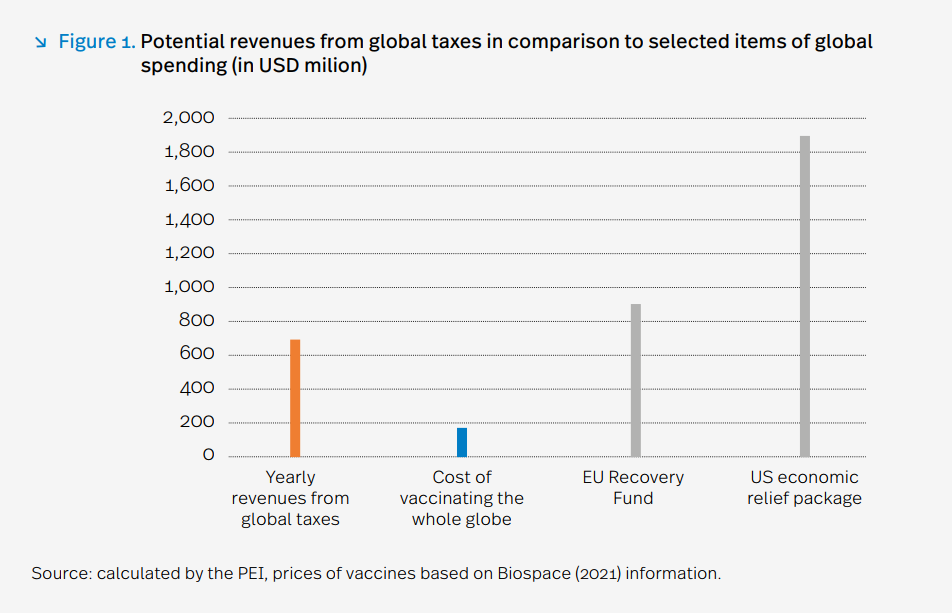 From digital tax to global CIT

The pandemic has accentuated the importance of digitalisation. Hardly any family or firm around the globe would have survived the past year without businesses such as Google, Apple, Facebook or Amazon. At the same time, transnational corporations have been known for their avoiding corporate income taxes. Profit shifting to tax havens is common practice. Having noted record-high sales of EUR 44 in the EU in 2020, Amazon reported a loss of EUR 1.2 billion, thus avoiding income tax.

‘The OECD has been addressing this issue. We seem to be quite near a global compromise on the matter. Firstly, arrangements are being made to tax transnational corporations’ profits where they are earned. Secondly, we are close to a consensus on a global minimum CIT rate (15 per cent) for the largest multinational companies’, says Łukasz Błoński, an analyst at the Strategy Team of the Polish Economic Institute.

For several decades, income and wealth inequalities have been increasing. In 2019, the richest 10 per cent of the world’s population owned 85 per cent of all global wealth. In 2020 alone, the value of billionaires expanded by over USD 5 trillion to as much as USD 13 trillion. Tax systems find it challenging to keep up with such fast-growing assets. In recent years, national states have significantly reduced taxes on the richest individuals, with limited capacities to cope with a wide range of tax avoidance measures. The wealthiest transferred USD 7.6 trillion to offshore accounts to escape tax administrations.

‘The wealth tax would apply to the top 0.01 per cent of the world’s richest citizens. In this group, a tax rate of merely 0.5 per cent for wealth above USD 10 million and 1.5 per cent for wealth above USD 1 billion could lead to collecting an annual amount of USD 289 billion. Without a major dent in their wealth, it may result in better redistribution or increased budget revenues’, explains Łukasz Błoński.

The last recommendation is related to climate neutrality. Whereas some countries see the gravity of the issue and make efforts to reduce CO2 emissions, other states seem not to care or even treat their loose environmental standards as a comparative advantage. The answer could be the design and introduction of global climate tax, adjusted to the differentiated socio-economic development levels of particular regions. On the one hand, it will provide the funds necessary to fight the climate crisis; on the other hand, the tax tool will be adapted to the needs and capabilities of individual countries. Such a solution could bring USD 278 billion annually.

The Polish Economic Institute is a public economic think-tank dating back to 1928. Its research spans foreign trade, macroeconomics, energy and the digital economy, with strategic analyses on key areas of social and public life in Poland. The Institute provides analysis and expertise for the implementation of the Strategy for Responsible Development and helps popularise Polish economic and social research in the country and abroad.