At present, as many as 7 Member States of the EU have public debts exceeding 100 per cent, with the limit laid down in the Maastricht Treaty at 60 per cent. In the US, the scale of the Fed’s quantitative easing related to the pandemic has been as much as 57 per cent higher than during the financial crisis.

Despite the unprecedented fiscal and monetary expansion, in 2020 the US interest expenditure on public debt was a mere 1.7 per cent of GDP – half the level noted 30 years before. Today, the Bank of England speaks of climate more often than of inflation and the macroeconomic situation. The report of the Polish Economic Institute entitled ‘The new policy mix. The relationships between monetary and fiscal policy – lessons from the crisis’ gathers the most important observations from the economic policy conducted during the crisis. The authors indicate that the new policy mix should rely more on the experiences gained in recent years, reflect the state of the scientific debate and address present-day challenges, e.g. those related to climate change.

The policy mix is a combination of monetary policy pursued by the central bank and fiscal policy conducted by the government. The most essential long-term implication of the pandemic crisis for economic policy is likely to be a changed relationship between them. The crisis has forced central banks and governments to cooperate more closely than ever, whereas the burden of fundamental responsibility for business cycle stabilisation has shifted to a higher degree from monetary policy to fiscal policy. The report summarises the economic debate regarding the post-crisis policy mix architecture.

‘The traditional approach to the policy mix focussed on the dominant role of monetary policy as the factor to stabilise the economy. The main instrument was the interest rate policy conducted by the central bank. Fiscal policy played a secondary role, mostly limited to automatic stabilisers, e.g. unemployment benefits and progressive income taxes. But the pandemic crisis has forced countries functioning in conditions of historically low interest rates to unambiguously focus on fiscal packages as central instruments for economic recovery’, says Krzysztof Marczewski, PhD, DSc, an advisor at the macroeconomics team of the Polish Economic Institute. 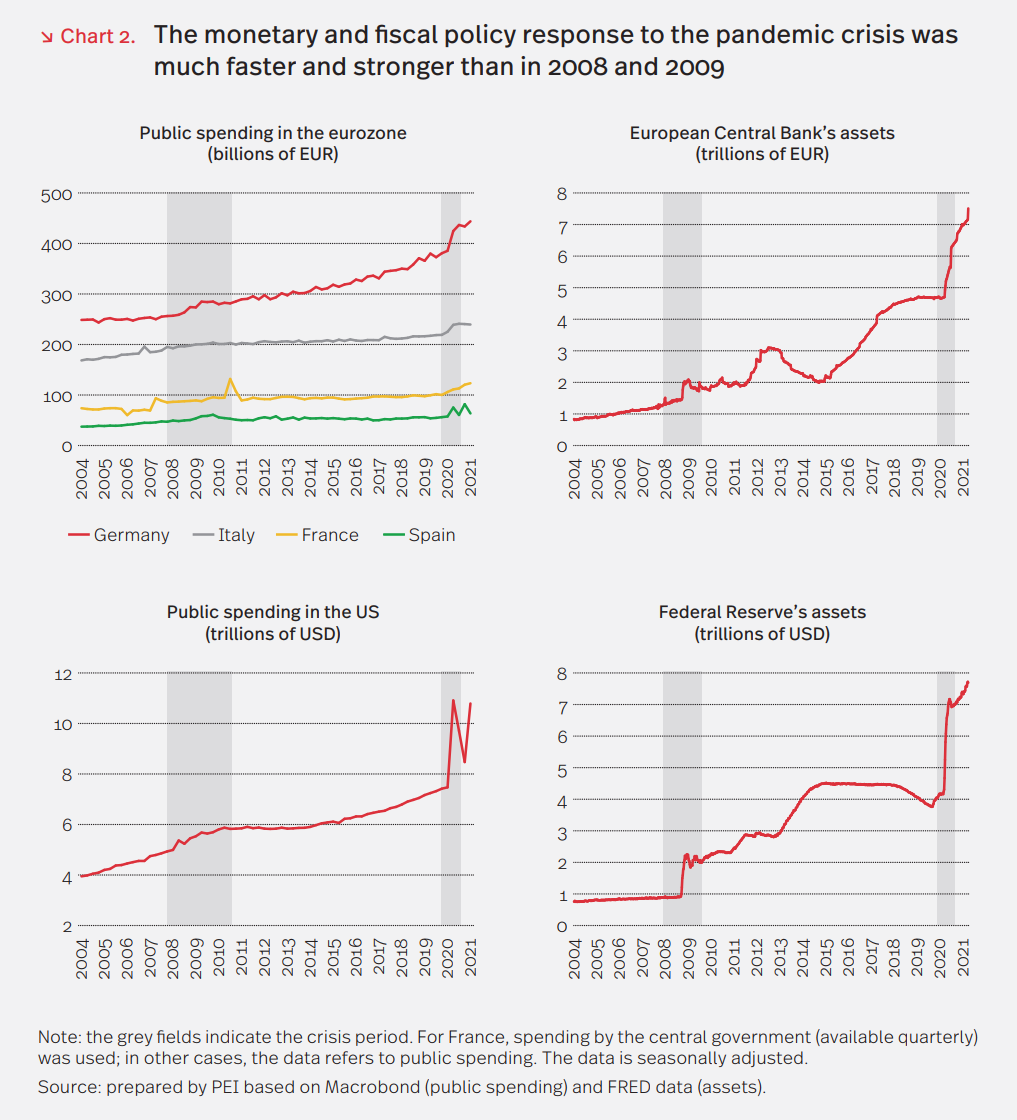 The opportunities and threats arising from abandoning the old paradigms

The existing macroeconomic theories were developed in different socio-economic conditions; although they used to form the basis of optimal economic policy measures, the economic landscape has significantly evolved in recent years. The new challenges to be urgently addressed by economic policy include not only temporary and short-term shocks, but also climate change and the ongoing digitisation.

‘Both the effectiveness of pandemic-related aid packages and the current content of the scientific debate allow to predict that the shift towards fiscal policy as the main tool for stabilising and stimulating the economy will be a permanent phenomenon. The long-term consequences may include changes in fiscal policy rules or increasing inflation targets by developed countries to 3–4 per cent’, says Marcin Klucznik, an analyst at the macroeconomics team of the Polish Economic Institute.

The key change in the existing policy mix will probably be the relaxation of fiscal rules. At present, fiscal policy is no longer expected to only serve to restore economic equilibrium; instead, it should remain expansionary also after countries have bounced back from the crisis, contributing to the implementation of strategic social goals. A key argument for revising fiscal rules is the low debt service cost. It must be remembered that the fiscal rules currently observed in the EU were designed to stabilise economies in the period of high real interest rates, whereas today’s rates are historically low and on the decline. For example, in 2020, the US federal debt service cost was below 1.7 per cent of GDP, nearly half the level noted three decades before, even though the debt had increased from 57 per cent to 127 per cent of GDP.

Considering that the new policy mix will involve closer cooperation between monetary and fiscal policies, there are concerns over the independence of monetary authorities. If the government decides to invest in green transition and the central bank simultaneously engages in large-scale issues of green bonds, it might shake what has been a clear division of responsibilities between fiscal and monetary policies. Moreover, the application of higher inflation targets would entail increased effectiveness of monetary policy due to raising interest rates on the one hand and the destabilisation of inflation expectations on the other hand. Therefore, such a policy may provide more room for manoeuvre for counter-cyclical measures taken by central banks, but greater price fluctuations may become its social cost, difficult to accept.

The Polish Economic Institute is a public economic think-tank dating back to 1928. Its research spans foreign trade, macroeconomics, energy and the digital economy, with strategic analyses on key areas of social and public life in Poland. The Institute provides analysis and expertise for the implementation of the Strategy for Responsible Development and helps popularise Polish economic and social research in the country and abroad.